ALPHA KAPPA ALPHA SORORITY, INCORPORATED is an international service organization that was founded on the campus of Howard University in Washington, D.C. on January 15, 1908. It is the oldest Greek-lettered organization established by African-American college-educated women. The organization became a perpetual body through incorporation on January 29, 1913. Alpha Kappa Alpha evolved and became a path through which selected college-trained women enhanced social and economic conditions locally, regionally, nationally, and internationally.

Sisterhood, scholarship, and service remain the priority of the organization today and graduate members in the Beta Psi Omega Chapter.   Through programs of service, the Chapter meets the needs of students by providing scholarships to high performing students, and academic tutoring and guidance to students at all grade levels.  The Chapter also provides guidance to its undergraduate chapters, BETA KAPPA at Huston-Tillotson University, DELTA XI at The University of Texas at Austin, and UPSILON ALPHA at Southwestern University.  The Beta Psi Omega Chapter is poised and prepared to meet the needs of the Greater Austin area through education, health, social service, environmental, and globally impactful initiatives.

We are proud of the those members of our Chapter who have served the Sorority on the International Level and in the South Central Region:

We are also proud of those members that serve our city, state, and country:

Our goal to be of “Service to All Mankind” is fulfilled locally, nationally, and internationally.

Over the past 80 years, several women have devotedly lead the bold, phenomenal, and outstanding women of the Greater Austin area in sisterhood and service as the Chapter President of the Beta Psi Omega Chapter of Alpha Kappa Alpha Sorority, Incorporated.  Under their leadership, the Chapter has evolved from serving East Austin to meeting the needs of Greater Austin and surrounding areas. 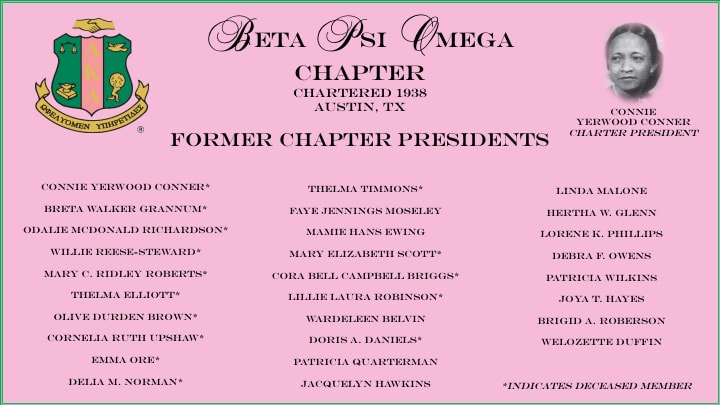 Mary Elizabeth Branch graduated from The University of Chicago.  She obtained a Bachelors and Masters degree in English. She also received honorary degrees from Virginia State College and Howard University.   She is the only female president in the history of Tillotson College.  She was the only African –American president of a four-year accredited college during her time.  She became president of a troubling institution with declining enrollments and poor administration. During her fourteen year tenure as president she improved facilities and was credited for receiving an “A” rating granted to Tillotson College by the rating agency of the Southern Association of Colleges and Secondary Schools. She enhanced the college's relationships with community and other educational institutions in Austin, including Samuel Huston College.  She was instrumental in the merger with Samuel Huston College. The two institutions joined after her tenure as president.  In 1935, Lyndon B. Johnson appointed her to the National Youth Administration Negro Advisory Board for Texas.  In 1944, Branch helped to establish the United Negro College Fund.
Olive Durden Brown
​6th South Central Regional Director
​
Olive Durden Brown served as the 6th South Central Regional Director (1947 – 1951). A graduate of Hampton Institute in Virginia, she was employed by the St. Louis, Missouri public school system as the first African-American professional librarian in the system.  She was the Head Librarian at the school now known as Huston-Tillotson University for thirty-three years.  Ms. Brown began her education at Anderson High School and continued at Tillotson College.  She is a graduate of Wiley College and Hampton Institute.  She also completed graduate work in English at Northwestern University and University of Minnesota.
Onie B. Conley
​Community Advocate
​
Lifetime Member Onie B. Conley was educated in the public schools of Austin, attending Old Anderson High School where she graduated valedictorian. After graduating from Samuel Huston College with a B.A. Degree, she began teaching in the Austin Independent School District. In a career that spanned 43 years, Conley was absent from work only one day. As a participant in the Blackshear Neighborhood Group, she served as the liaison between the neighborhood and the City Council. Her East Austin advocacy efforts resulted in the 10,000 square foot Carver Library and the use of the old library for a Carver Museum. That experience provided the groundwork for securing the senior center that today bears her name, the Conley-Guerrero Senior Center.
Wilhelmina Fitzgerald Delco
Texas State Representative 1974 - 1995

Wilhelmina Delco is a Power Broker and Policy Maker.  She influenced change throughout Texas.  Her activities changed the educational landscape of Texas which benefitted countless youth, including college students, as a result of her efforts in the Texas Legislature. She received her Bachelor of Arts in Sociology from Fisk University in 1950.  In 1968, she secured the votes to make her the first African-American to serve on the Austin Independent School District Board of Trustees.  After six years on the Board, she placed a bid for the Texas House of Representatives and won.  Delco served 10 terms with the Texas Legislature.  She served on twenty committees, many whose aim was to improve education and employment. She was the first African American elected official at-large in Travis County. During her term, she was appointed Speaker Pro Tempore in 1991. She was the first woman and second African American to hold the second highest position in the Texas House of Representatives. She was inducted in the Texas Women’s Hall of Fame and has received numerous awards and ten honorary degrees have been bestowed upon her. Delco has three buildings named in her honor including an education building at Prairie View A&M University, an elementary school in Pflugerville, TX, and a recreational facility in Austin, TX.
Azie Taylor Morton
36th United States Treasurer

Azie Taylor Morton served as Treasurer of the United States during the Carter administration (September 12, 1977 to January 20, 1981). She remains the only African American to hold that office. Morton was born in Dale, Texas and graduated from Huston-Tillotson College in Austin. Before becoming Treasurer, she served on the Equal Employment Opportunity Committee for President John F. Kennedy. She was also an election observer for the presidential elections in Haiti, Senegal, and the Dominican Republic; a member of the American Delegation to Rome, Italy for the Enthronement of Pope John Paul II; chair of a People to People Mission to the Soviet Union and China; and a representative to the first African/African American Conference held in Africa.